This website uses cookies to improve the browsing experience. If you continue browsing we understand you accept. 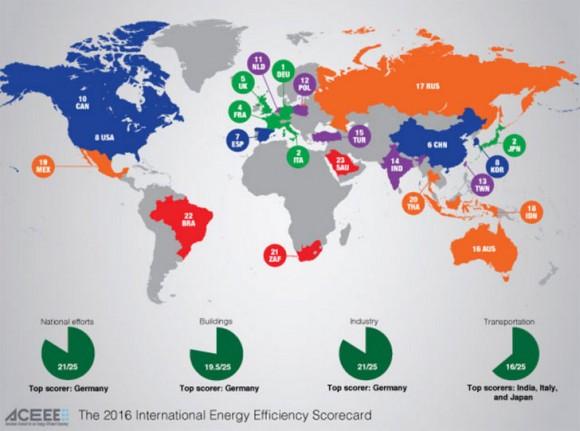 The III International Classification of Energy Efficiency, organized by the American Association ACEEE, has positioned countries in a ranking according to their commitment to energy efficiency. The country that leads this ranking and that has take more steps to achieving this is Germany. The second and third place is occupied by Italy and Japan respectively.

The importance of energy efficiency

Spain, although it is still far from the podium, has improved its results and reached the seventh position. This classification organized by the American Council for an Energy-Efficient Economy (ACEEE) is now in its third edition and aims to raise awareness among countries on the importance of energy efficiency.
To develop the ranking it has been taken into account policies and energy efficiency programs of the 23 participating countries representing 75% of energy consumption across the globe. The indicators used in the classification are: buildings, industry and overall energy use nationwide.

Countries that fewer measures have taken in this respect are South Africa, Brazil and Saudi Arabia.

One of the points that are taken into account when making this ranking is the building construction. As we have explained many times, the rehabilitation of buildings and facades is the key to energy efficiency.

Many times we do not notice the effect of air conditioning or heating. In winter we get cold through the windows and walls off summer heat. For what is this? The poor condition of the facade.

To put a solution, among all measures, it is best to start a rehabilitation or building facades. In most cases it is advisable to install rainscreen facades advantage as they get an energy saving of around 40%.

Rainscreen facades and thermal insulation for the rehabilitation of social housing

Implementation of 3D printing in construction

Type your email address and we will send you it…